The Marble Mountains are located at the coastal town of Danang in Vietnam, and is an incredible place to explore and an easy and short day trip from Hoi An. The natural beauty of the mountains representing the five natural elements and the importance of this historical and religious site, make Marble Mountains worth a visit.

Please note: This post may contain affiliate links and if you buy something following a link on this page, I will get a small commission at no extra cost to you. Thanks for supporting this blog.

Marble Mountains in Danang, Vietnam - Complete guide on how to explore!

Marble Mountains (Ngu Hanh Son) is a must-see site if you are in Da Nang in Vietnam, or a great option for a day trip from Hoi An. There are a variety of options on how to explore this historical and religious site, it will depend on your level of interested and also, fitness level.

The Marble Mountains are a group of such a unique five limestone and marble hills in Ngu Hanh Son District. The mountains’ sheer, porous limestone is punctuated by caves and tunnels, which are fitted with spectacular Buddhist and Hindu shrines. it dominates the plain-like landscape along the coast road between Hoi An and Danang. If you happen to land in Danang airport, you can’t help but notice them looming in the distance and jutting up dramatically.

Their intrigue continues as you get closer and see the scores of magnificent marble carvings of lions, Buddha, Jesus, elephants...you name it, and they can carve pretty much anything from marble.

During my visit in Hoi An, I decided to take a full day trip to the Marble Mountains and I am glad I did it as I really enjoyed the natural beauty of this place, but also could learn more about the intriguing history and importance of this religious site in Vietnam.

On this guide you can find all information you need to know on hot to get here and how to explore this very important site in Vietnam. Safe travels and enjoy the Marble Mountains!

Check out: 13 Top Things to do, see and explore in Hoi An, Vietnam 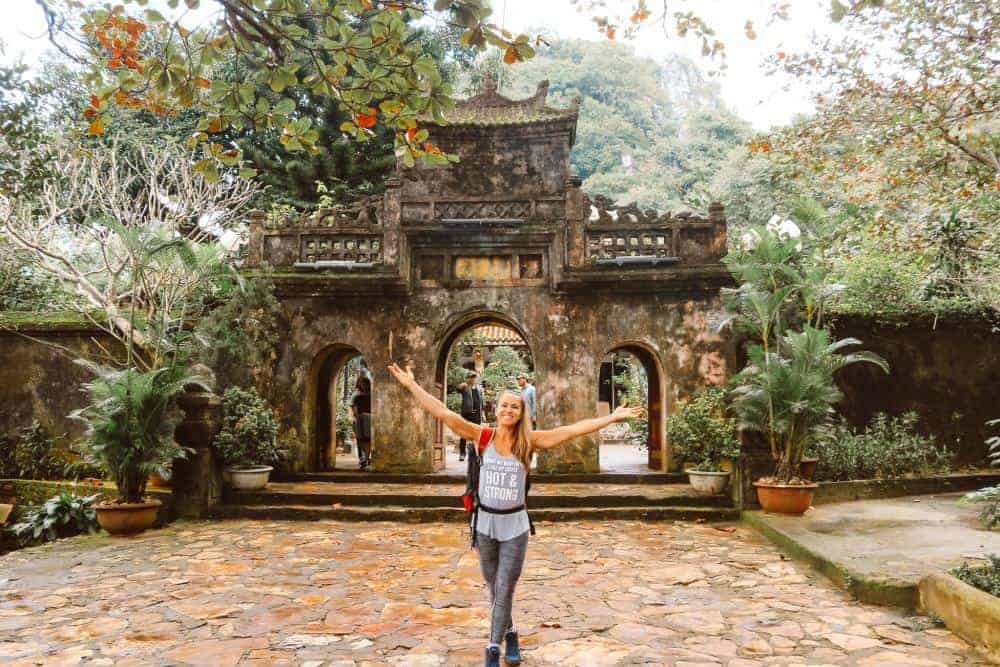 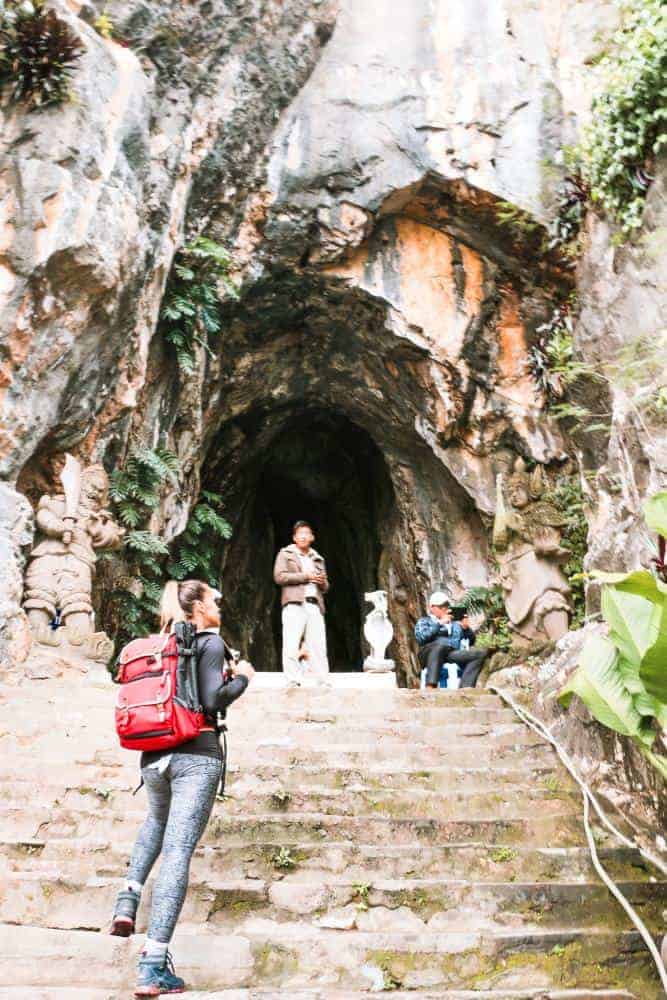 The entrance of the Mt Thuy mountain 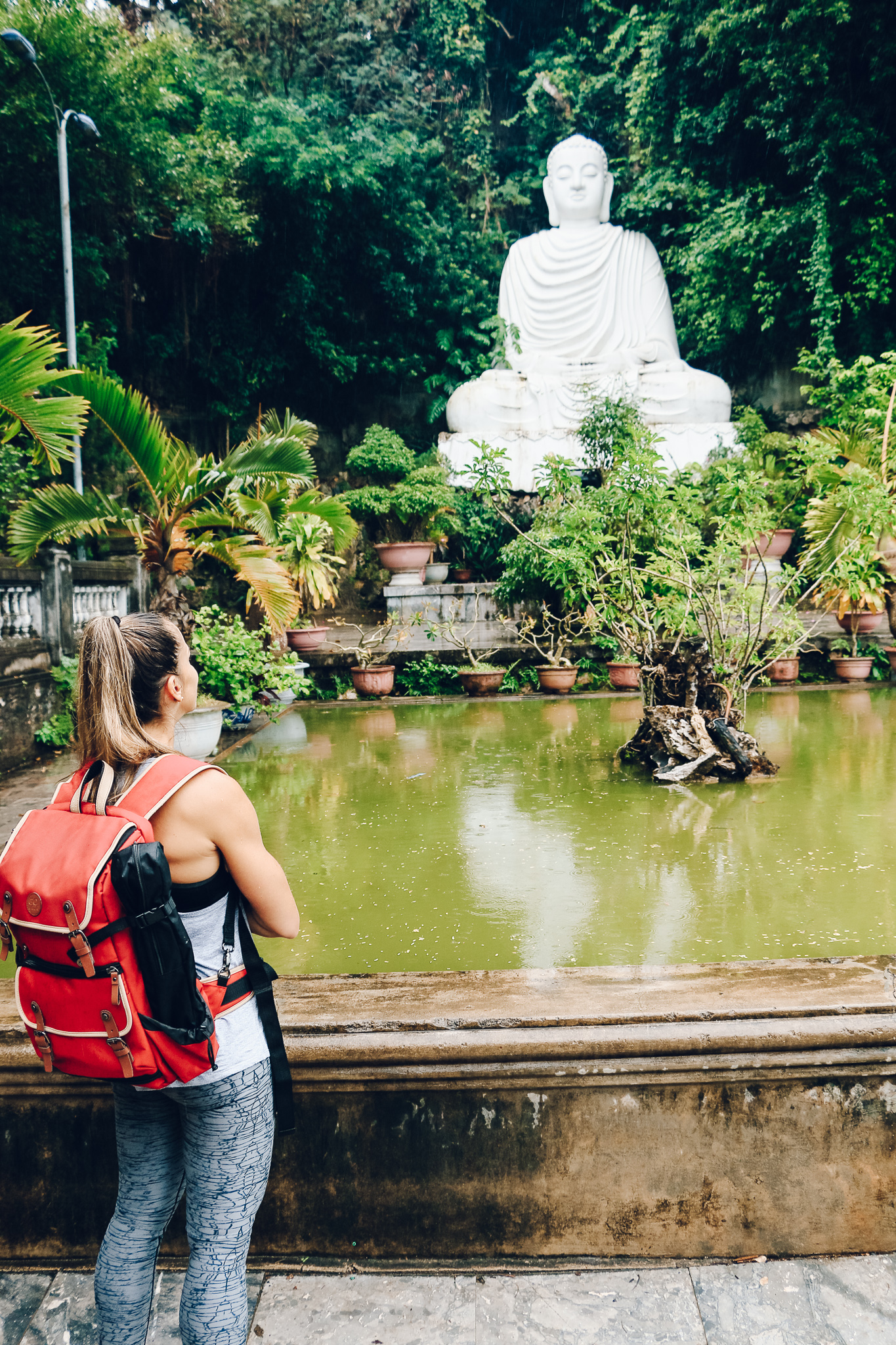 Make sure to enjoy the gardens and amazing sculpures

Where is the Marble Mountains and how can I get there

Danang is located 45 km (28 miles) from Hoi An, it takes approx.. 1 hour by motorbike or a little quicker by car ride from Hoi An.

Marble Mountains is considered one of the top places to visit in Danang, and it is located about 7km from the city center, next to the Non Nuoc tourist area and situated in Hoa Hai ward, Ngu Hanh Son district.

By Motorbike or Own transportation:  A day trip from Hoi An to the Marble Mountain on your own transportation is very easy and cheap. I rented a motorbike while I was in Hoi An for US$5 per day and rode it to Danang and took the Le Van Hien highway, or you also have the option to take the Truong Sa coast road. The traffic was light and the roads are in great condition.

Parking: If your option is to go on your own motorbike or car, you have the option to park inside the designated parking lot at the gate and pay US0.40

By Bus: You can also take a bus from Hoi An to Danang. The bus will pass the Marble Mountain along the Le Van Hien highway. You can check the bus timeline here.

Organized tours to Marble Mountain: If hiring a private tour, you will have several options for very unique experiences for full day or half-day tours.

Don't travel before you read: Vietnam Trip Tips, everything to know before you go!

When visiting the Marble Mountains in Danang, Vietnam

Entry Fee:  There are two entrances to Marble Mountains. Gate one and Gate two. Both entrances cost 40,000 VND (1.70 USD) per person to enter. Although the second, further entrance has an easier climb and is less-frequented. The elevator costs an additional 15,000 VND (.65c USD) per person, each way. The 156 step climb at the main entrance is not particularly difficult and offers some interesting views of shrines and stone-carved friezes on your way up.

Tour Time: There are a variety of tours you can do. It takes roughly 1-1/2 hour to view the sights at Mt. Thuy. My full tour took approx. 4 hours and I visited the 5 mountains and spend time taking pictures.

Best Time to visit: Marble Mountains is open year-round from 7 a.m. to 5:30 p.m. The best months to visit are during the summer season, even though the heat can be stifling. During the rainy season (September to November), heavy rains can come up suddenly and their torrents will slick the marble stairs. I have been during a raining day and it was very slippery and dangerous. Best time to visit is in the morning, before 8:30 AM as the tour buses start to arrive around 9:15 AM. For weather condition on this region of Vietnam, check here.

What to expect: There is a lot to see in Marble Mountains, such as is a religious temples, pagodas, caves, amazing stone carvings, and local marble carving shops 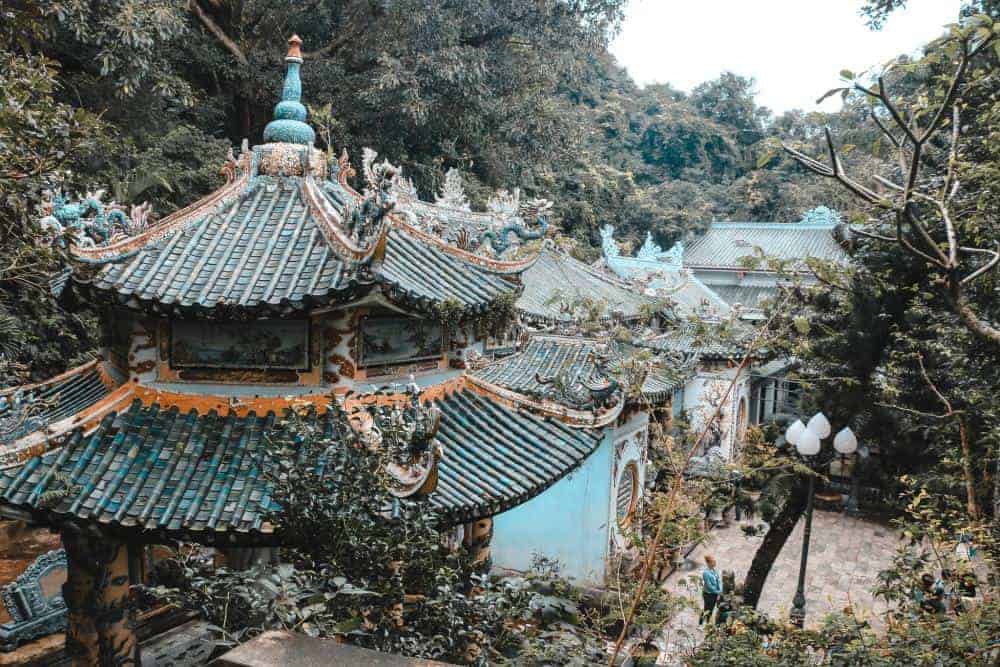 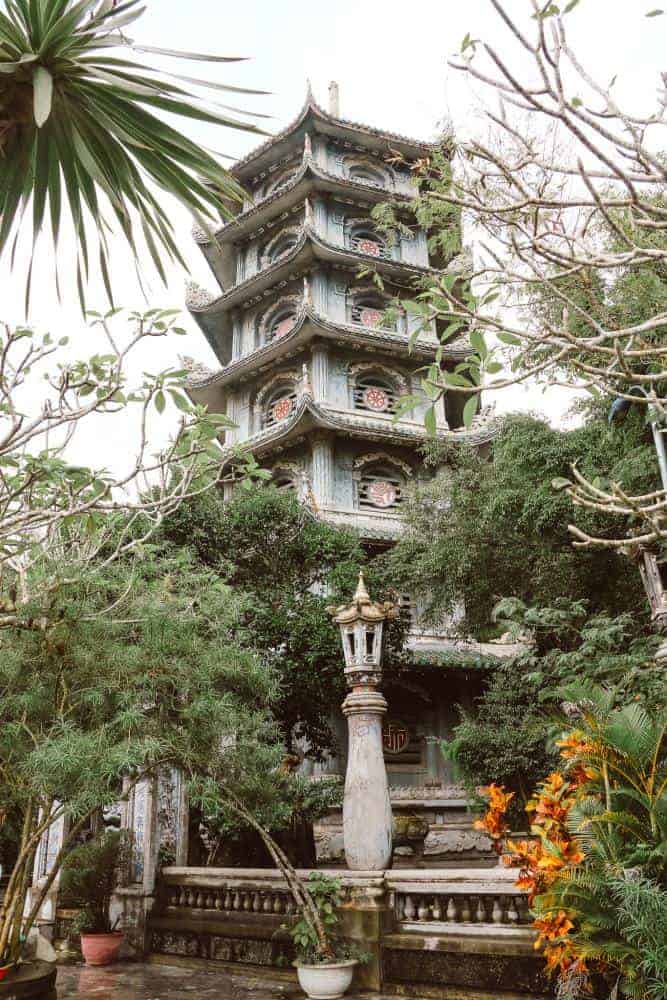 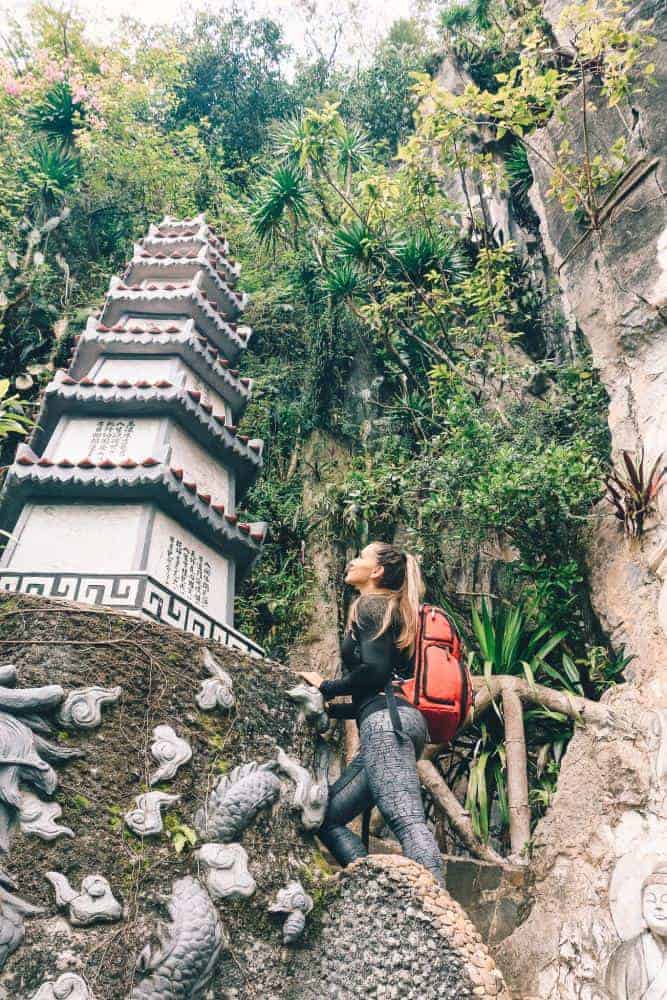 Tower on top of the Mt Thuy mountain

Tam Thai Pagoda is 400-year old built in the 17th century and it has been destroyed and rebuilt many times.

Consider some fitness level: There are a lot of stairs involved and some steps are high and uneven and not too easy if you have short legs, but the view from the top is outstanding. Many areas are accessible through narrow steps in the rock and on a rainy day the steps can be slippery. You have the option to pay to take the elevator up also.

What to wear: First of all, I recommend to wear comfy and sturdy shoes if you are planning to visit all the sites and climb up to the top. Comfortable clothes - gym attire can be a good choice! I saw a lot of girls wearing dresses and high heels - they look cute, but they didn't seem to be having too much fun trying to climb up the marble steps and path on a rainy day. All for a good Instagram picture, right 😉

How to explore the Marble Mountains in Danang, Vietnam

When visiting the Marble Mountains, you will probably come to the big mountain Thuy Son, next to the parking lot. Then you will make your way around visiting the main sites:

Each of the mountains have a variety of sights to see and experiences. It was great as many of the caves and pagodas where not overcrowded with tourists and I could enjoy the amazing history, understand the importance of religious of this place and to dive on serenity of this magic experience.

The best option to avoid the crowd is to arrive earlier, around 8:00 AM. 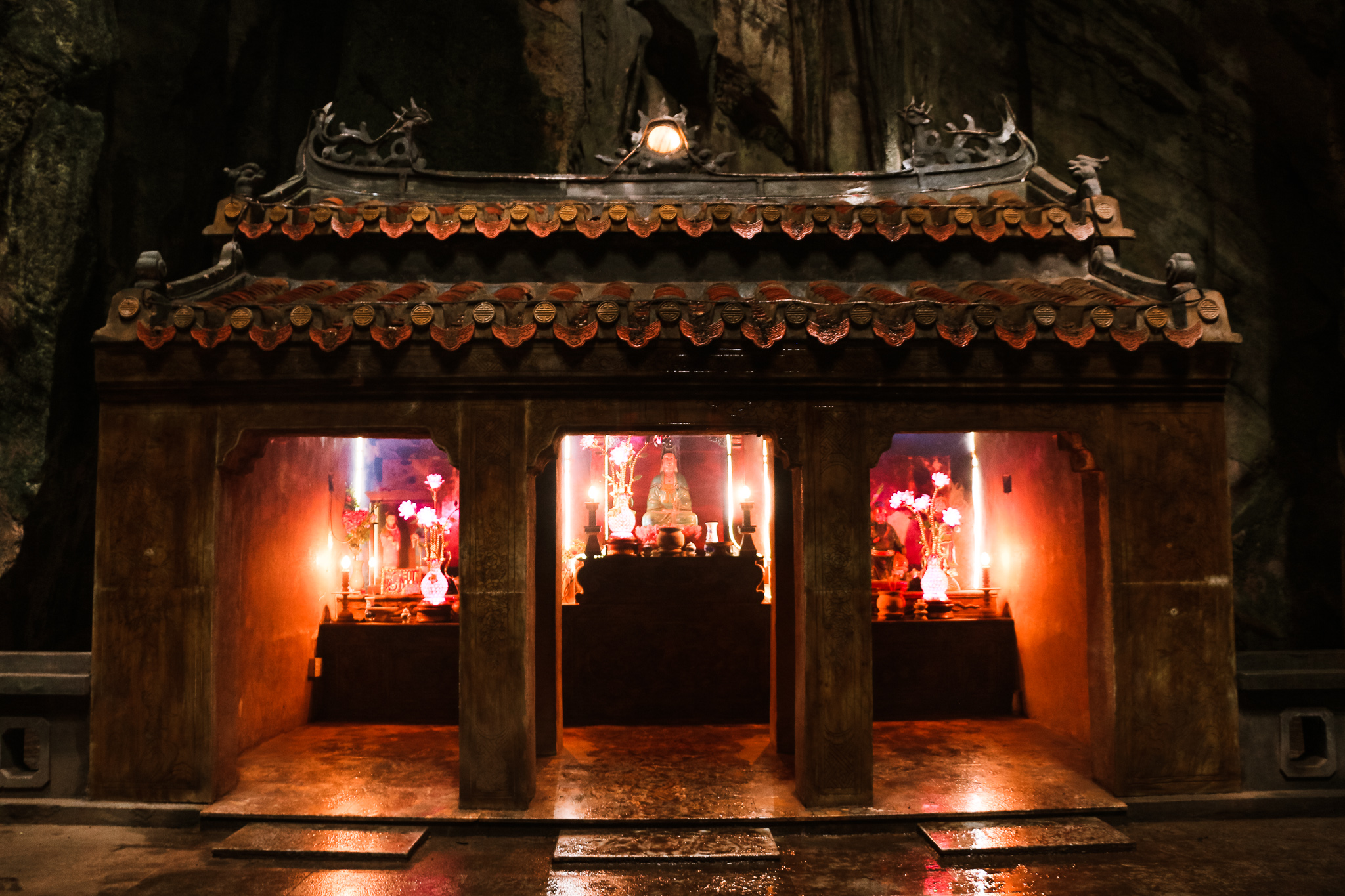 One of the Pagodas inside the cave 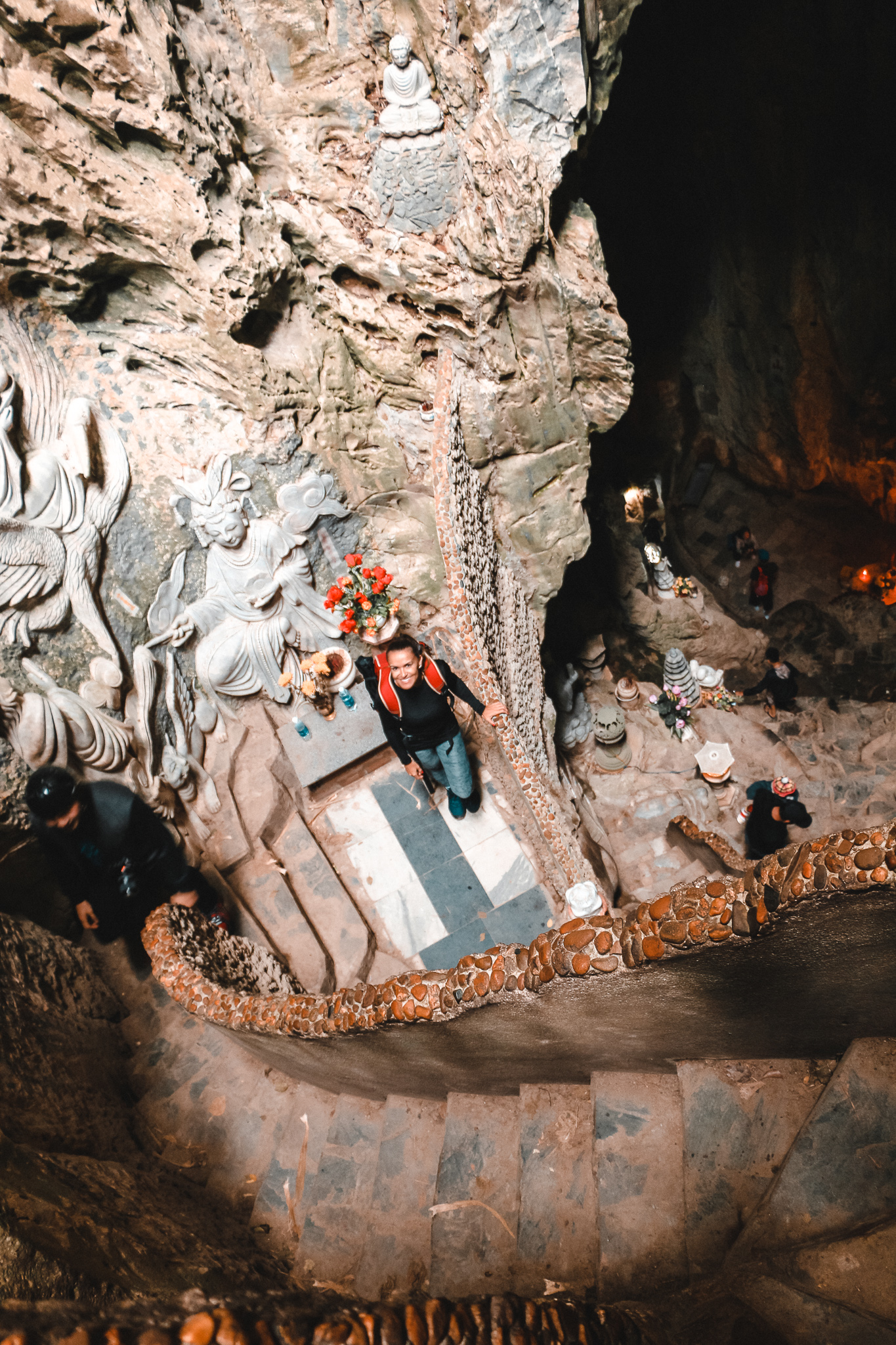 Summit of the Mt Thuy

Narrow steps to the top of the Mt Thuy

The history of Marble Mountains

The cluster of limestone outcrops that make up the Marble Mountains were initially sacred sites workshiped by the Cham peoples of Central and Southern Vietnam. However, the mountains are not massive in comparison to some of Vietnam’s northern ranges. But they are impressive in relation to the flat central floodplains of the surrounding countryside. So it is easy to see why they cast an attractive spell on the Cham.

They also contain a myriad of cave networks and tunnels that the Cham recognized as holy places.

In 1825, centuries after the decline of the Cham Empire, the Vietnamese King Minh Mang, named the mountains “Ngu Hanh Son”—The Five Element Mountains. Each mountain is named after one of the five essential elements in Eastern Philosophical thought: Kim (metal), Tho (earth), Moc (wood), Hoa (fire), and Thuy (water).

Together, the mountains were a spiritual destination for both the Vietnamese aristocracy and Mahayana Buddhists. So over the years, Buddhist followers constructed the sanctuaries that you see today.

However, during the French colonial period, French geologists realized the mountains were comprised of marble and re-named them the “Marble Mountains.” The French name stuck, and the rest, as they say, is history.

In the centuries since the Champa Empire, Buddhist followers have built shrines and temples at the summits of the mountains and in the caves below them. Therefore the Marble Mountains and their shrines within, continue to lure visitors to this day to enjoy their expansive views, wander their intricate caves and be swept up in their history. 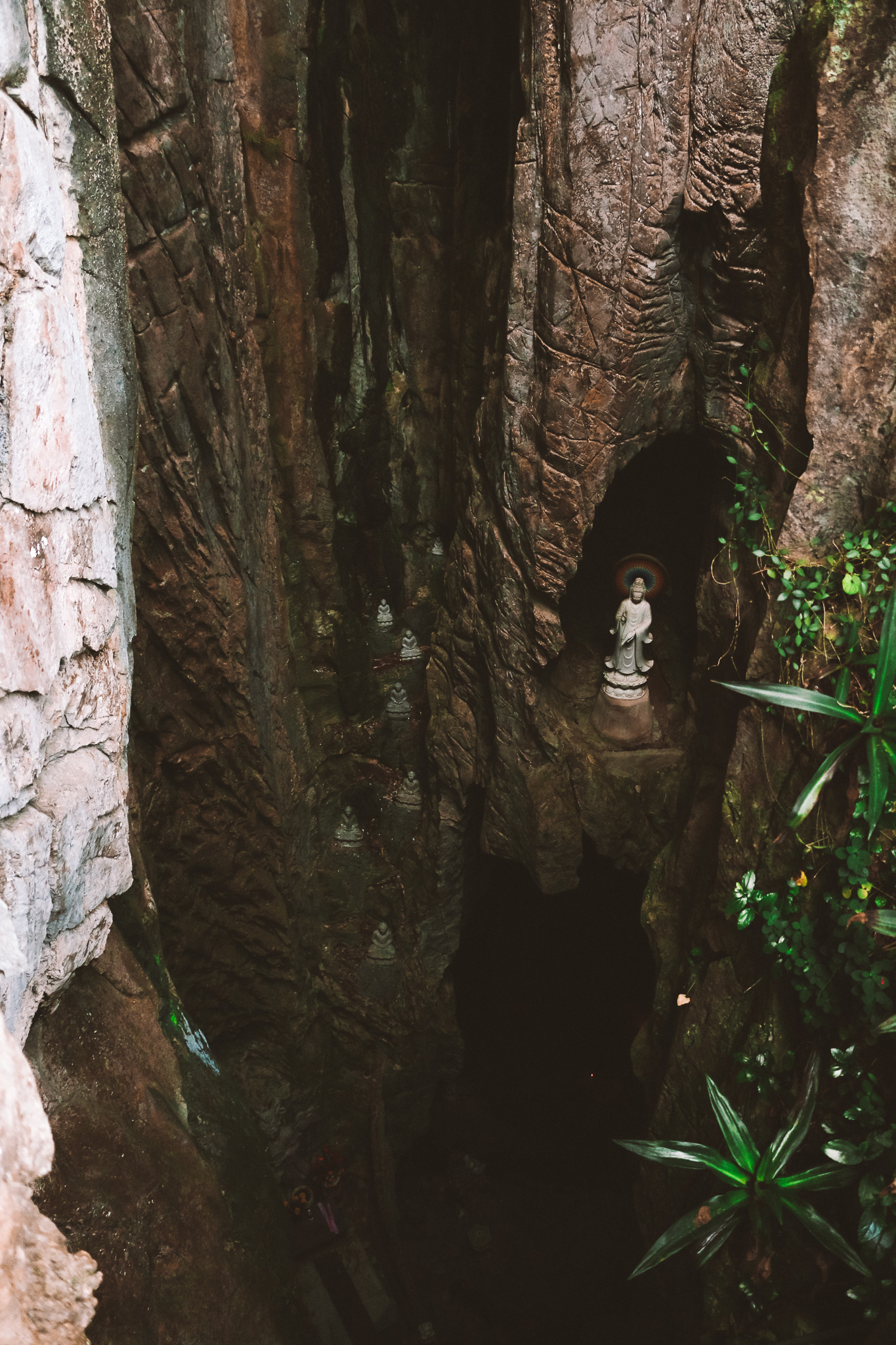 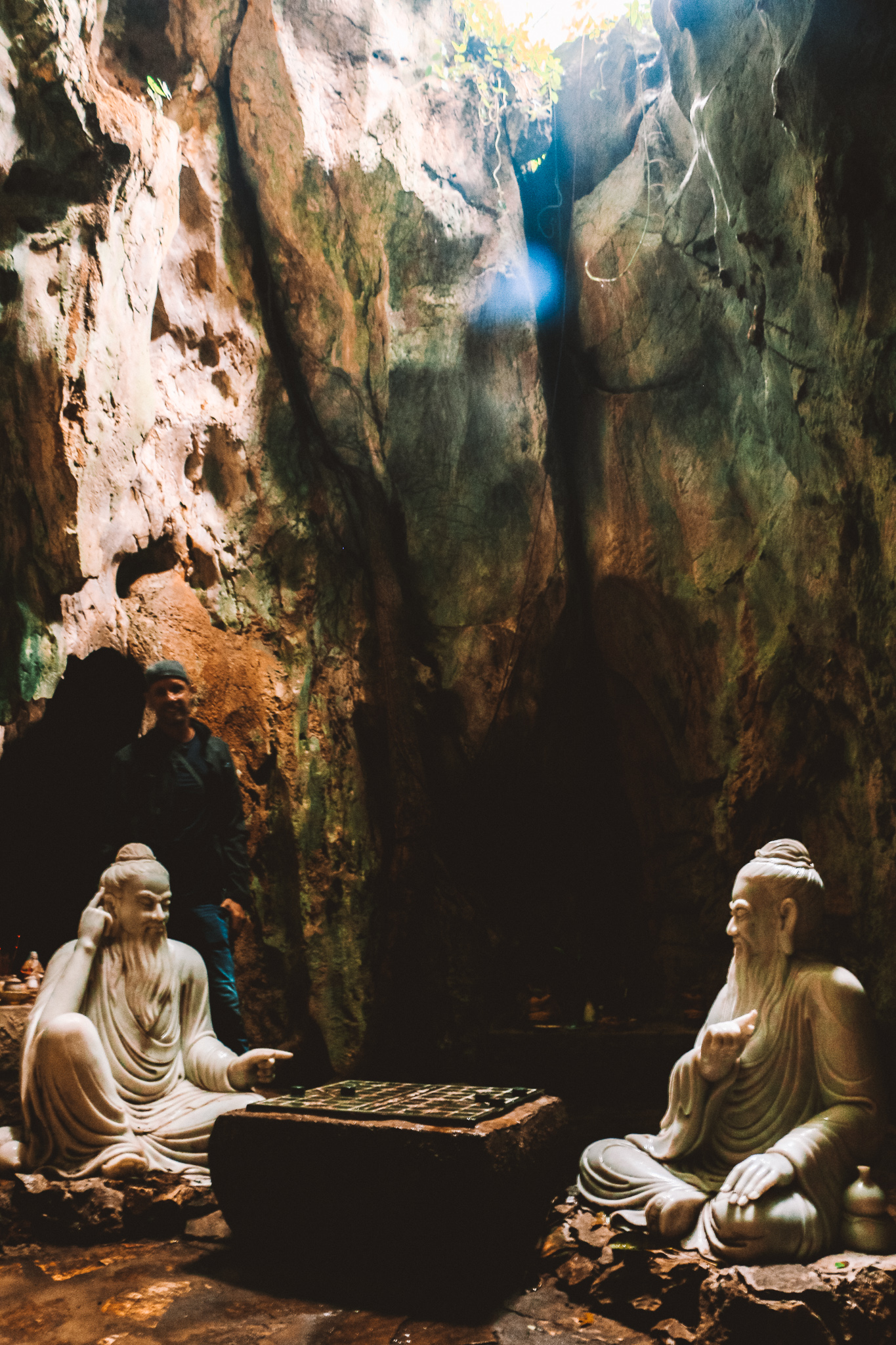 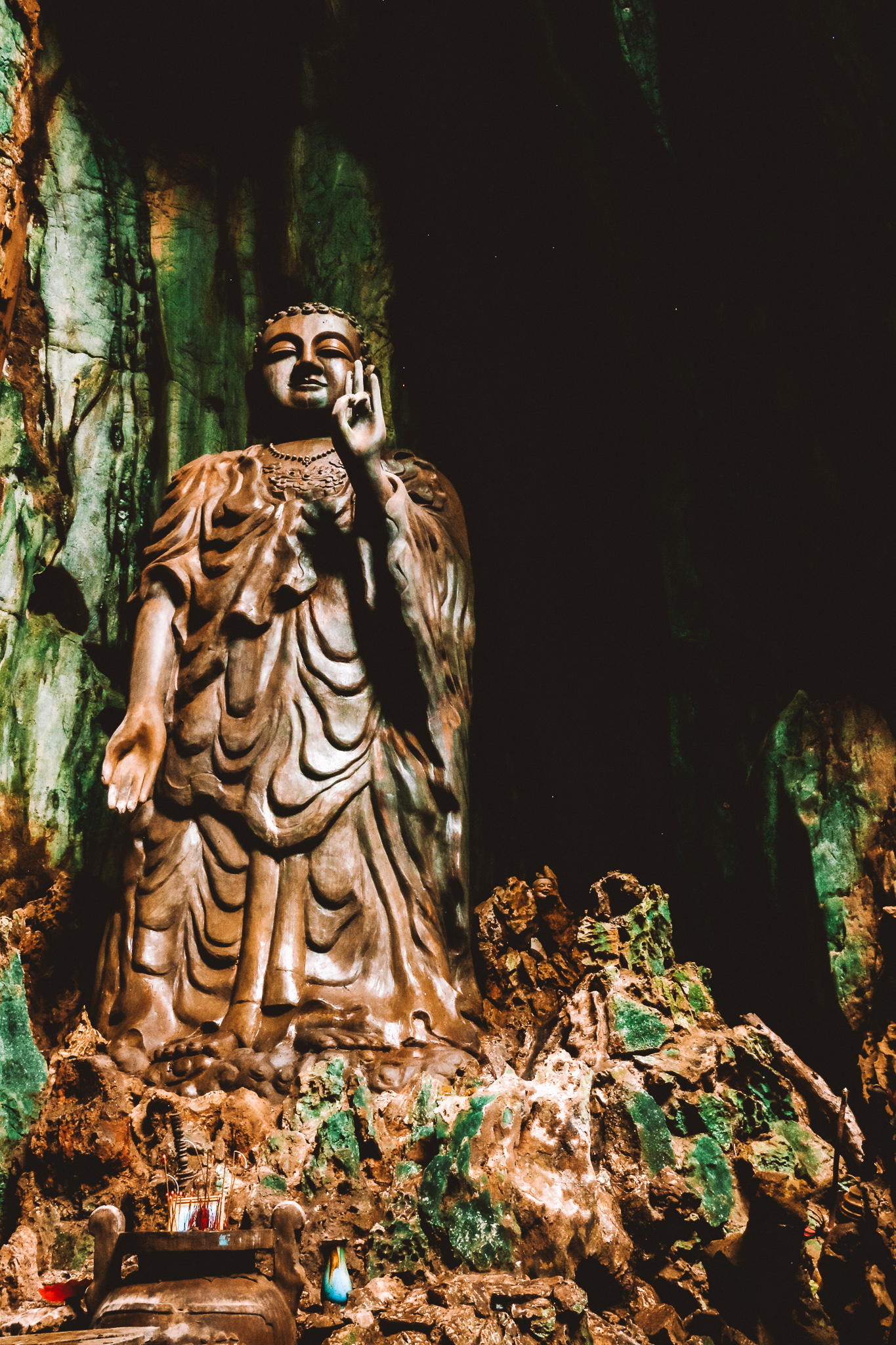 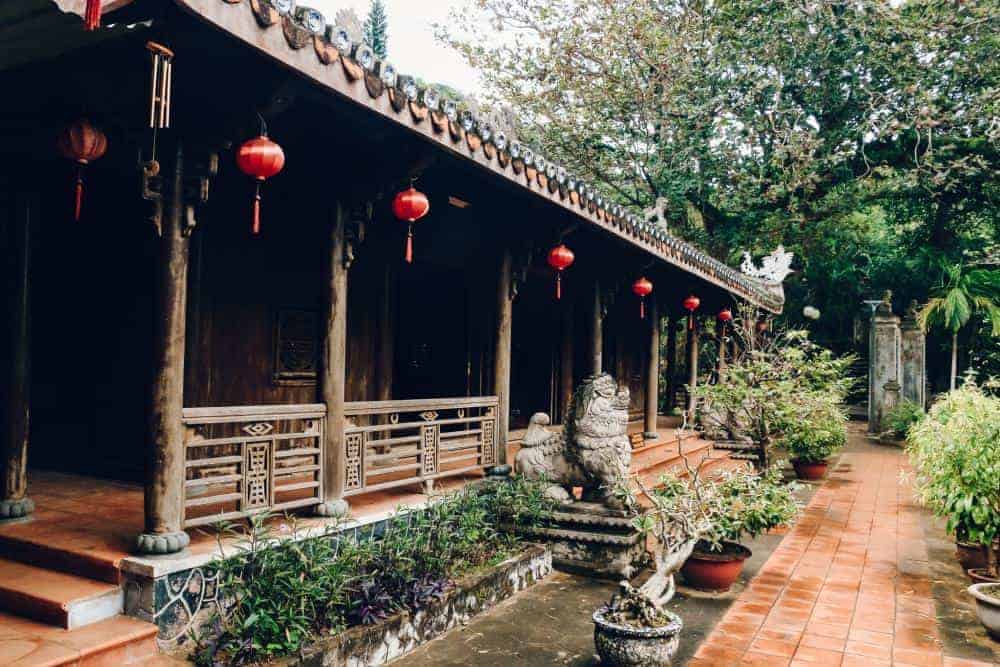 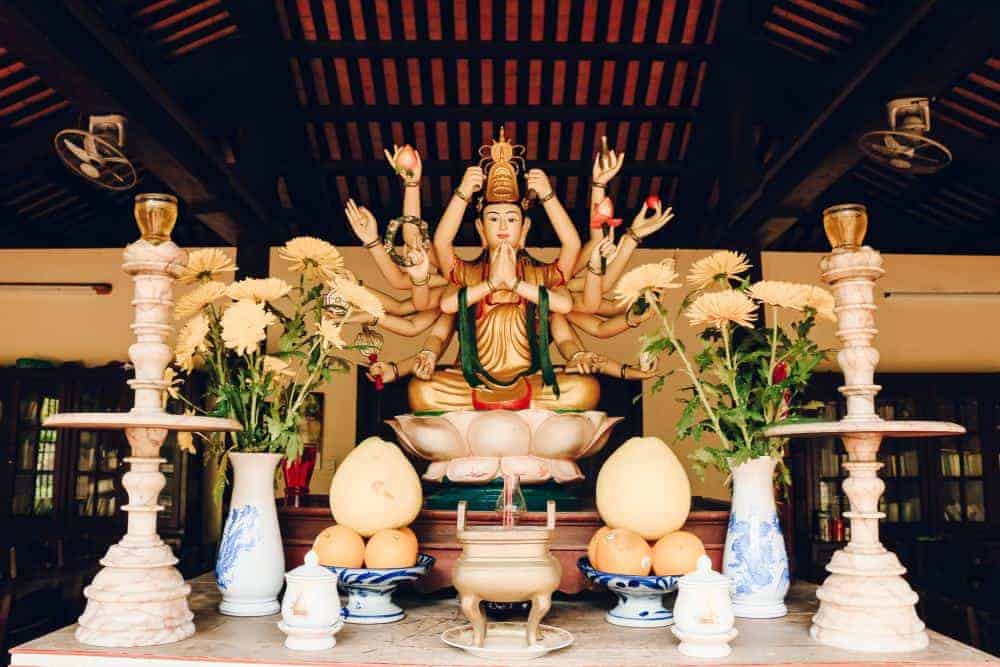 After spending 4 hours exploring the Marble Mountains, I visited the marble carving stores at the foot of Non Nuoc, a crowed shopping area made up of dozens of stone carving shops and lots of artistic sculptures that are carved by hard-working local craftsmen.

The marble you will see here comes from different parts of Vietnam, and if you decide to buy something, keep in mind that it won't be a souvenir from Mt. Thuy. The red, white, and green marble used by local carvers for tombstones, statues, and touristy knick-knacks sold in Da Nang and the surrounding beaches came from the large rock deposits in the mountains themselves. Sadly the limitless consumption of stone from their reserves would reduce the towering hills to rubble. So, in order to maintain the mountains as a destination worth visiting, quarrying has recently stopped, ensuring the mountains’ longevity.

You can also watch the artisans work, sculpting and sawing huge slabs or marble. Check out these places and find out how much a 20 foot lady Buddha statue costs. You can negotiate pricing and shipping cost for them to arrange to deliver to your house.

Planning a trip to Vietnam? Check out my complete Vietnam Travel Guide 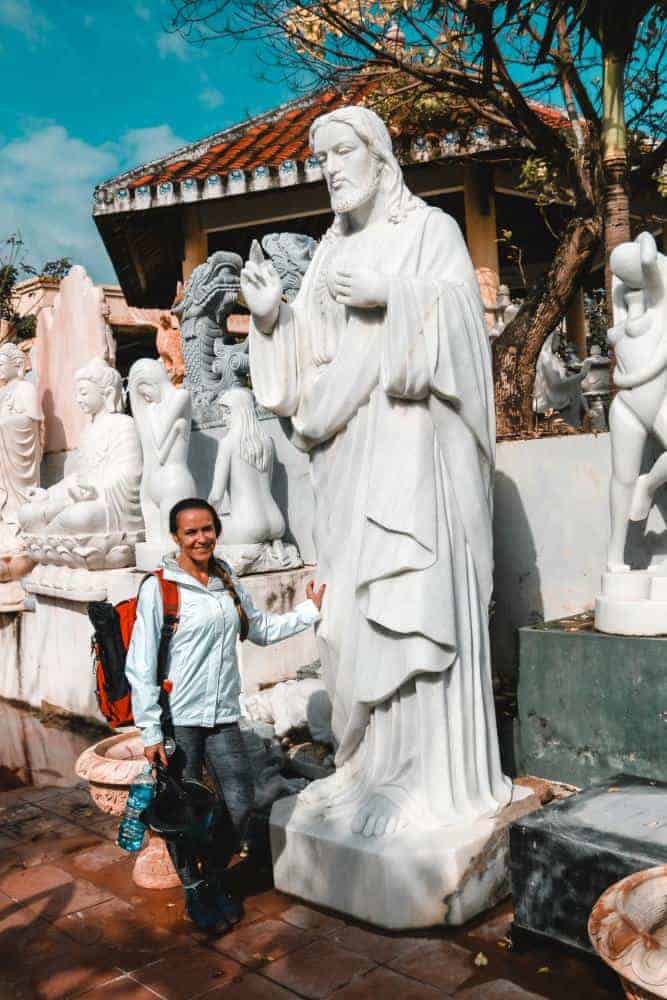 Vietnam Travel Tips: Everything you need to know before your trip

Paula Pins the Planet and you can Pin this post

Marble Mountains in Danang makes a perfect day trip from Hoi An, Vietnam. There is a lot to see and explore. Find out more, and plan your visit...